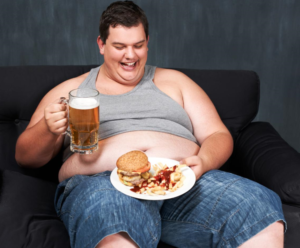 Approximately 8 out of 10 patients suffering from type 2 diabetes are either overweight or obese. Among these people, their bodies need two to three times as much insulin compared to a person with an average and healthy weight.

When the pancreas tries to make that much insulin, it pushes beyond capacity and insulin-producing cells start to slow down and eventually die. This makes the situation worse because this leaves the pancreas with fewer cells to produce insulin.

Compounding the problem, recent research has also shown that visceral fat, especially the abdominal fat releases molecules that can be harmful to the pancreas. This means the more visceral fat you have in your belly, the higher risk of damage to your pancreas.

The relationship between weight and type 2 diabetes can be tricky. But there are some patients who have completely reversed diabetes by simply losing weight.

Dr. William Bornstein, an endocrinologist at the Emory Clinic in Atlanta said that a lot of folks who are sedentary and are overweight do not develop diabetes. So there is definitely an important genetic contribution when one develops insulin resistance.

While it may feel like the deck is stacked against you, it is particularly crucial that you make an effort to lose the excess weight. Sometimes, a dramatic weight loss can completely reverse type 2 diabetes. This is most effective on patients who make the efforts of weight loss right after receiving their diagnosis.

How do we know that weight loss is an effective form of treating diabetes?

Dr. Peter Cohen, an assistant professor of medicine at Harvard Medical School and a general internist at Cambridge Health Alliance said that it is important that patients regulate their blood glucose levels properly and they should regulate their weight as well. Cohen also said that when people try to make the efforts to shed the extra pounds, the blood sugar goes down with it.

There was a four-year study recorded in the December issue of Journal of the American Medical Association wherein 4,500 obese adults within the age of 45 to 76 were involved. These patients all suffered from diabetes.

According to this study, the rates of remission were about 15% to 20% higher compared to the other group who lost less weight.

In the editorial section of this study, Dr. Patrick O’Connor, of the HealthPartners Institute for Education and Research in Minneapolis and Dr. David Arterburn, of the Group Health Research Institute in Seattle said that the results of the study only proves that people should be more concerned about preventing rather than treating diabetes. When you weigh less, your pancreas can better perform its job and keep up your body’s need for insulin.

In some cases, getting back to your healthy weight is enough to reverse diabetes. Even if it does not get your blood glucose completely back to normal, it lowers your body’s need for insulin medication and other diabetes care treatments. Losing weight also reduces your risk of diabetes complications like heart problems, kidney diseases and nerve damage.