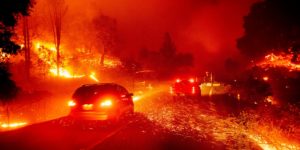 What can California do to better prepare for forest fires?

Climate change has created a new reality for the state of California, which suffers from increasingly destructive fires every year. Its inhabitants will have to learn to live with fire, experts believe. Forest fires are nothing unusual in this region, where the dry climate and the desert winds combine to create conditions particularly conducive to fire. But with global warming, the fire season is stretching and these are becoming more widespread and destructive.

Between 1972 and 2018, the area burned annually in the state increased fivefold, according to a study published in Earth’s Future in August 2019. The current fires in the San Francisco and Los Angeles area are the latest in a particularly devastating series of fires that have ravaged California in recent years. Five of the ten most destructive fires in the history of the state have occurred in the past ten years.

However, despite the astronomical losses and costs linked to these fires, little has yet been done to improve the resilience of communities, experts say. Since it will be difficult to reverse the warming trend in the medium term, they believe that it would rather be necessary for the most exposed communities to learn to live with an increasing threat of fire. A major problem is the fact that Californians, like many other Americans, build their homes too often in areas at risk of fire, without any thought or planning.

According to a report from the California government, 25% of the state’s population lives in peri-urban areas near forests, shrubs or meadows. This is also where we see the strongest growth in the construction of new homes. Insurance companies estimate that at least 15% of California homes are built in these areas and up to 77% in some northern California counties, such as Mariposa and Alpine.

Residential construction in these sectors is problematic for two reasons. First, because it increases the risk of fire. According to data from the California Department of Forests and Fire Protection (CalFIRE), 95% of fires in the state are caused by humans (badly extinguished butts, campfires left unattended, embers escaping BBQ, etc.). On the other hand, the presence of humans complicates the task of firefighters, who sometimes have to put firefighting in the background to focus on protecting homes.

According to a study jointly conducted by the United States Forest Service and the University of Madison, 82% of the buildings destroyed by fire between 1985 and 2013 in California were in this peri-urban area . California authorities however seem little concerned with urban sprawl. In the California government’s plan on forest fires and climate change, which talks about prevention and resilience, there is no mention of any construction restrictions in high-risk areas.

People want to live in good places to live according to the Western Regional Climate Center at the Desert Research Institute in Reno, Nevada. The problem is that some people may not realize how fire-prone the area they live in is. We need better communication on the subject so that it is better understood. After one of these big fires, an entire neighborhood can be burned to the ground. A constant flow of rolloff dumpsters will be needed to clean out the area and maybe rebuild, but with better guidelines against fire this time.

Insurers are reluctant to contribute. If the state does not act, the insurance companies are doing it. Some of them no longer want to take care of buildings at risk. According to the California Department of Insurance, there was a 6% increase in the number of insurance contracts not renewed by the insurer in peri-urban areas between 2017 and 2018. For residents of areas directly affected by the fires of 2017 and 2018, the increase is 10%. This is a wake-up call for the State Insurance Commissioner.

There is an upward trend in California, where insurers are not renewing policies for people at risk due to forest fires. Failure to obtain insurance can have a domino effect on the local economy, affecting home sales and property taxes. Not building in risky areas would be a first step to minimize the danger. But there are also ways to protect existing homes, including managing the fuel, that is, the flammable vegetation around the buildings. You can, for example, put hardwoods rather than conifers in certain places, since conifers are more flammable, or simply by removing the fuel around the infrastructure. Standards should also be put in place to ensure that the materials used to construct the buildings are non-flammable. Cedar shingle roofs should be avoided as an example.